In a bid to take on Samsung, Motorola and Huawei, the Chinese smartphone company Xiaomi has launched its very first foldable smartphone in the market. After launching Mi 11 Ultra, Mi 11i and Mi 11 Lite the company introduced Mi MIX Fold featuring a liquid lens camera. Yes, the company has launched its first-ever foldable handset exactly after two years since it was first teased. 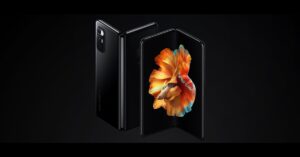 Xiaomi has officially forayed into the flexible phone market with the debut of Mi MIX Fold. The market is largely dominated by three companies Samsung, Motorola and Huawei.

Xiaomi’s Mi MIX Fold adorns a similar form factor as the Samsung Galaxy Z Fold 2, which folds inwards. The display inside features an 8.01-inches OLED screen with 2,480 x 1,860 OLED. However, the display supports a 60Hz refresh rate panel in contrast to Z Fold 2 and the Mate X2. 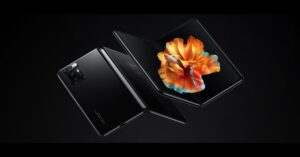 The outer display offers a 6.5-inch OLED display with 2,520 x 840 pixels of resolution and a 27:9 aspect ratio. Unlike the primary one, this supports a 90Hz refresh rate panel.

Under the hood, there is the top of the line Qualcomm Snapdragon 888 processor paired with up to 16GB of RAM and 512GB of storage options

The Xiaomi’s foldable phone carries four speakers fine-tuned by Harman Kardon and is further backed by a 5,020 mAh battery having 67W fast charging support. The Mi MIX Fold also features a desktop mode to give it a feel of a traditional desktop UI, therefore, turning it into a mini laptop.

Here Xiaomi has given a large camera module similar to the Mi 11 Ultra having a small secondary panel. On the front, there are three camera sensors including a 108-megapixel primary sensor, 13-megapixel ultra-wide sensor and an 8-megapixel ‘liquid lens’. The latter one works as a macro lens and doubles up as a telephoto lens offering a 3x optical zoom. According to the company the 8-megapixel ‘liquid lens’ is powered by its own Surge C1 ISP that helps in quick focusing as well as optimised White Balance with a higher dynamic range.

The company did not talk about the hinges, but Mi MIX Fold is claimed to withstand up to 1 million bends.

Samsung has today officially launch its 5G variant of the Samsung Galaxy S20 FE. To recall, the device was launched in the US last year in September, in both 4G and 5G variants but only the 4G variant of the phone could make it to the Indian market in the month of October 2020. Now that the Samsung Galaxy S20 FE 5G has been introduced in the country. Read on how the 5G variant is different from the 4G version in addition to its pricing and availability details.

The all-new Samsung Galaxy S20 FE can now be purchased in India in a single 8GB RAM with 128GB storage variant. The smartphone is retailed at Rs 55,999, which is a bit on the higher side as it the 5G variant and comes with a Qualcomm processor instead of the Exynos 990 SoC (that drives on 4G). However, Samsung (as an introductory offer) is now giving it at Rs 47,999 starting today via Samsung.com, Amazon.in, Samsung Exclusive Stores and leading retail outlets. This mobile phone will be offered in Cloud Lavender, Cloud Mint, and Cloud Navy colour options.

The Samsung Galaxy S20 FE 5G comes with a 6.5-inch full-HD+ Super AMOLED Infinity-O Display offering 2,400×1,080 pixels of resolution with an aspect ratio of 84.8 percent and a pixel density of 407ppi. At its heart, there is an octa-core Snapdragon 865 SoCpaired with 8GB RAM with 128GB storage, which can be expanded up to 1TB using a microSD card. The software front of the device runs on Android 11 with Samsung’s One UI 3.0 on top.

The Galaxy S20 FE 5G features a triple rear camera set up that includes a primary 12-megapixel wide-angle lens with f/1.8 aperture, a 12-megapixel ultra-wide-angle lens with 123-degree field of view (FoV) and f/2.2 aperture and lastly an 8-megapixel telephoto lens with f/2.0 aperture. The rear cameras support 3x Optical Zoom, up to 30x Super-Resolution Zoom, OIS (Optical Image Stabilization) and Tracking AF. While on the front, there will be a 32-megapixel selfie camera with f/2.0 aperture along with autofocus support.

The device is backed by a 4,500mAh battery along with wireless fast charging 2.0 and supports 25W Super-Fast charging. The Galaxy S20 FE 5G ensures end-to-end hardware and software security with enhanced Knox Security. It is IP68 certified which makes it dust and water-resistant. In terms of connectivity there is Wi-Fi, Bluetooth v5.0, GPS/ A-GPS, NFC, and a USB Type-C port, but lacks a 3.5mm audio jack. The sensors onboard include an accelerometer, compass, fingerprint sensor, gyro sensor, hall sensor, light sensor, and a proximity sensor.

What are the arguments in support of the rumour?

The Indian government has not released any official statement regarding the returning of the video game. However, a few sources suggest that the rumour may turn into a reality in the coming months. Some famous Indian YouTubers have even posted stories offering good news to PUBG fans in India.

The positive updates from Krafton, PUBG Mobile developer, have the maximum credibility. In the past months, the company has been in a negotiating mode. It even said that they respect the decision of the Indian government and shall patiently try to resolve the issues. The fact that the company is constantly in touch with the Indian government is seen as a silver lining.

Despite ongoing rumours regarding the comeback of PUBG Mobile to India, the release date is yet not known. Almost all the reports and sources confirm that game shall be released in the coming months. However, none of them carries material information regarding the launch date. Considering the heat of the rumours, we can expect significant outcomes regarding the video game in the next two months.

According to Sean Hyunil Sohn, Head of Corporate Development at Krafton, “I cannot tell the timing or anything because we don’t know yet. But what I can tell you is, we care about the Indian market greatly, and also, that’s how I get to know you and get to know friends in the Indian gaming industry now. So definitely, we will work hard to make it happen”.

What is the significance of the rumour?

The news of the returning of the PUBG Mobile video game is surely a matter of celebration for PUBG gamers in India. This time Krafton wants to launch the video not merely with a business mindset. Instead, the company wants to release a video game that offers an Indian essence to gamers.

Recent positive negotiations on the Indo-China border is also seen as an influencing factor regarding the PUBG Mobile. Although the official statement from the Indian government is awaiting, the enthusiasm on the game developer’s end to conform to the national sentiments of the Indians shows that the rumour of the returning of the video game might turn into a reality.

The post PUBG Mobile India launch: The government reportedly permits to launch the game in India appeared first on https://www.gadgetbridge.com.